Those are the lyrics from Joe Walsh’s 1973 hit “Rocky Mountain Way” which is also the walk in music the Milwaukee Brewer’s closer Corey Knebel (kuh-NAY-bull) has playing as he emerges from the bullpen, and heads to the mound to shut a game down for the Crew. No lyrics have rang truer for the opposition who has had to face Knebel so far this season. 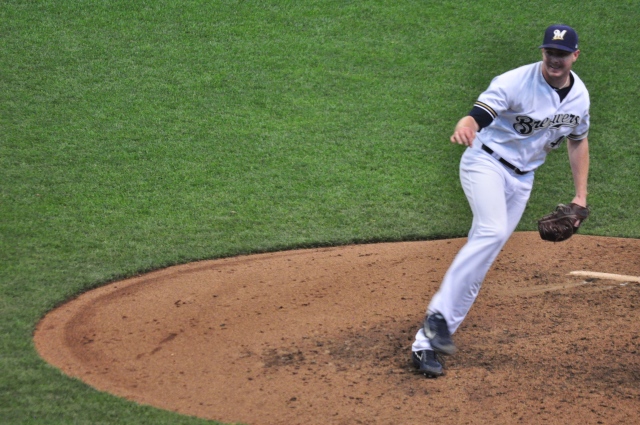 Here in 2017, Knebel has been virtually untouchable, and yesterday afternoon set a new MLB record exclusively as a reliever to begin a season, recording at least one strike out in each appearance. Knebel has strung together 38 consecutive appearances, each with a “K” (37.2ip,65K). The record on Thursday afternoon at Miller Park in Milwaukee came in the top of the ninth when lead off hitter Josh Bell, Pittsburgh’s first baseman, watched the first two offerings from Knebel get called for strikes, fouled off a few, then took a wild “cricket- like” swing for strike three.

#55 Josh Bell before the infamous pitch

Now that Knebel has moved ahead of Aroldis Chapman who set the modern Era record when he was with Cincinnati in 2014 (37 games), the next milestone is just one inning away. Bruce Sutter, while with the Cubs in 1977 set the record for consecutive games with a strikeout by a reliever in a single season with 39, from June 1st to October 10th of that year.

As far as the walk in music, Knebel say he loves Joe Walsh and The Eagles, “growing up that is all that my dad and us listened to; Steve Miller, The Eagles, CCR … Walsh’s hand just floats as he plays the guitar.”  To use another Walsh hit to describe number 47’s season, one might cue up “Life’s Been Good,” and if things continue the way they are, Corey may be shutting things down for the National League on July 11th in Miami for this year’s 88th Mid-Summer Classic.