Off to San Francisco

The Brewers head off to their second stop on their important pennant chasing road trip, San Francisco, and they go in there feeling pretty good about themselves.

The Crew took 2 of 3 from the powerhouse Colorado Rockies over the weekend and stayed in contention for the N.L. Central with the Cubs. They also shed some light on their chances in the N.L. Wildcard (2.5 games back) which some think they have no chance at, and the only way to play meaningful October baseball, is winning the N.L. Central.

Friday night, the Brewers did not start off on their best foot despite having veteran, and contract year pitcher Martt Garza on the mound. The Rockies plated 8 runs during Garza’s 4 and a 1/3 innings of “work,” where his 81 pitches, resulted in 9 hits, 3 of which were round trippers. Needless to say, the Brewers dropped game one of the series 8-4.

Game two was a little different story, as the Brewers racked up 11 hits on their way to a 6-3 defeat of the Rockies. The game was actually much closer than the score, since the game winning RBI came off of the bat of Jesus Aguilar pinch hitting for Anthony Swarzak in the top of the 9th.  With two out  and Keon Broxton on base, Jesus Aguilar hit a bomb 446 feet for his third pinch-hit homer this season, which ties him for most in the Majors. Corey Knebel came in and did what he does best, save another game, and the Brewers righted Friday’s ship. 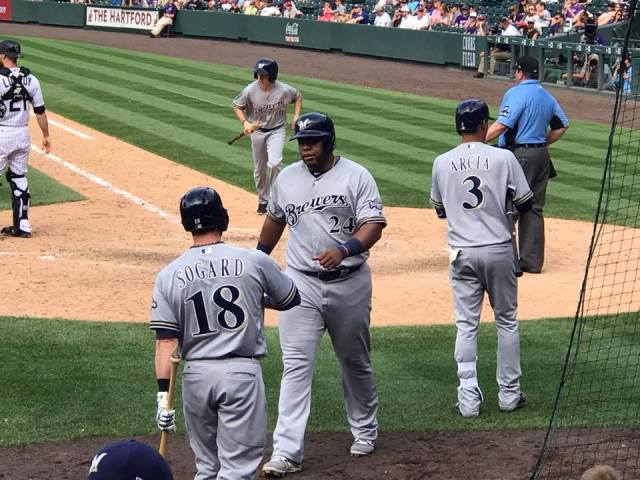 Jesus Aguilar after HR #3 this weekend

“Sunday Funday,” and that’s exactly what it was as the Brewers scored at least one run from the 5th inning on, and Jesus Aguilar kept depositing baseballs over the fence in Denver. Aguilar hit two home runs Sunday as the Brewers went on to double up the Rockies 8-4 and take the series. Chase Anderson, on his first appearance since coming off the DL pitched 5 good innings, giving up just 2 hits and one run against that killer Rockies line up in the thin air at Coors Field. Anderson  improved his record to 7-2, while the bullpen continued to do their thing, and Corey Knebel recorded save number 26. 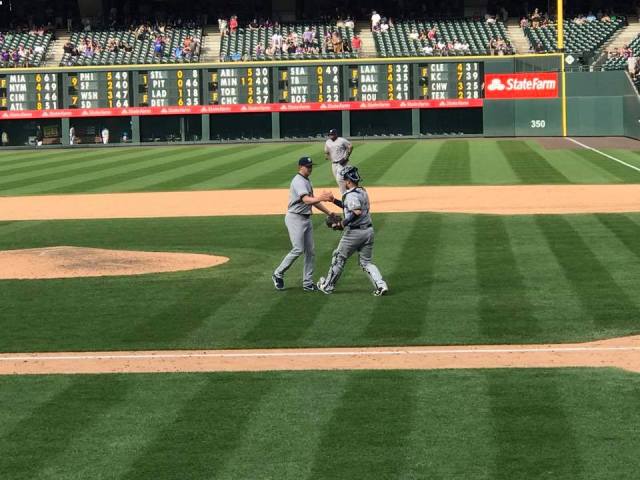 The west coast swing is off to a good start, but, there is still 3 games with the Giants and 3 with the Dodgers. As I mention on twitter (@jeffmiller11) before this road trip started, the Brewers will go 6-3 during this stretch – let’s see what happens it should be fun!

2 thoughts on “Off to San Francisco”