Milwaukee Brewer closer Corey Knebel continues to amaze, while continuing to rock a 70’s theme when he shuts the door for the Brewers.

Last night when Knebel was summoned in the ninth to secure a one run lead, in a 3-2 game against the Miami Marlins at Miller Park, not only did his walk in music “Rocky Mountain Way” by Joe Walsh (1973) play on the stadiums PA system, but, some 70’s flare was added to the scoreboard as well. The graphics on the scoreboard were Evil Knievel -“ish.” Anyone who was around in the 70’s know how big stuntman/daredevil, Evil Knievel was, and how he was all about the “red white and blue” along with his cursive signature. That’s exactly what is brought to mind when when one now watches Knebel on the scoreboard as he is enters the game. 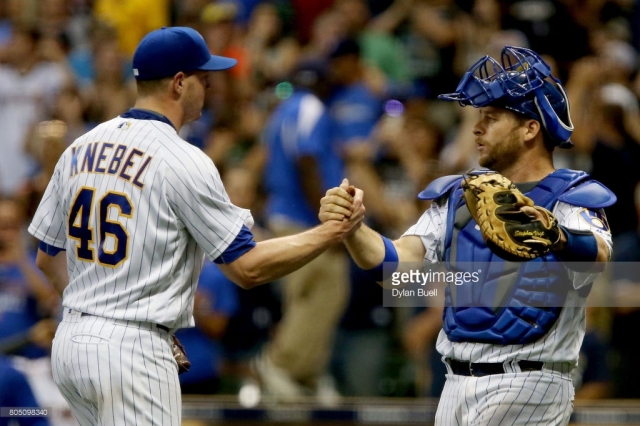 As for Knebel, well, he etched himself into MLB record books, and now stands alone in sole possession for consecutive games with a stikeout (with at least 1) by a reliever in a single season with 40 appearances (39.2ip, 68K). The previous record was held by Hall of Famer Bruce Sutter who racked up 39 in 1977 when he was with the Cubs. This streak is also the longest to start a season in the modern era (1900).

As far as how the Brewers got to using Knebel in the ninth to collect his 13th save and set the record, newcomer Stephen Vogt made his Miller Park debut in a Brewer uniform in big fashion. Driving in all 3 Milwaukee runs on his first 2 homers as a member of the National League. A solo shot in the 5th off of Edinson Volquez, and then a 2 run bomb (420ft)  in the 7th off of David Phelps.

The Crew is now 43-39 as of July 1st, and atop of the National League Central … maybe, just maybe there is something “brewing” down at One Miller Park Way.