The Wrong Kind of STREAKING!

The Brewers lost again last night, in the opener of a 4 game series to the division leading St. Louis Cardinals (that’s right… I typed “DIVISION LEADING” and the CARDINALS) and became the first N.L. team this season to lose 9 games in a row. This is the same Brewers team that held the lead in the division or at least a share of it for 150 days this season (since 4/5), they are now looking up at St. Louis who now hold a 4 game lead over the Crew in the Central. (The Brewers right now are in a tie for the SECOND Wild Card spot with Atlanta). 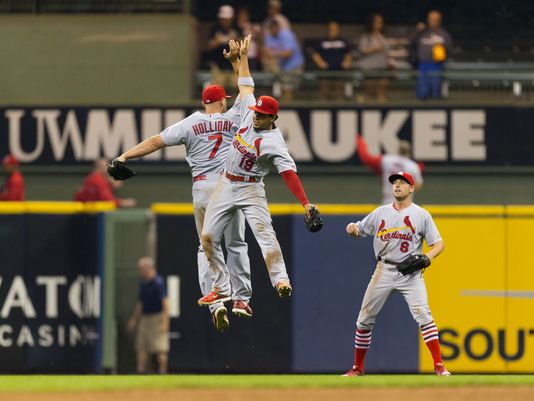 The Brewers did play a far better game than they had in the two previous series (San Francisco and Chicago) but came up short in the contest 3-2, with Wily Peralta suffering only his 10th loss of the season against 15 wins. Both teams left 11 runners on base, and the Brewers had the tying runner in scoring position in each of the last 4 innings, unable to plate any of them.

Fantastic defense by the Cardinal outfield is what kept the Brewers from running away with this one and stopping their losing streak. Khris Davis was robbed twice by Jon Jay in right field, once in the first with Johnathan Lucroy on third, and the second time in the 6th with the bases juiced. In the first Jay caught the ball inches from the ground, and in the 6th Jay “got on his horse” to the deepest corner of right field catching the ball in mid-stride over his head.

Logan Schafer was the victim of some thievery in the bottom of the 8th with 2 runners on and one out, Cardinal Centerfielder Peter Bourjos ran straight back “Willie Mays style” and caught Schafer’s drive as he crashed into the wall.

During this 9 game skid the Brewers are averaging just 2 runs per game, and that’s just not going to cut it, hopefully the bats will wake up, and they can get back on the right track… where’s Jobu when you need him.

2 thoughts on “The Wrong Kind of STREAKING!”