Apparently the Brewers aren’t going to go 162 – 0 for 2014, and I don’t think anyone in their right mind thought that would happen, hell, I having losing 71 games this year. Although, Tuesday night should have been been a win with the pitching performance put out by starter Kyle Lohse. Lohse threw 7 innings, 4 of them scoreless only giving up 5 hits in the process. The only bad thing was that 2 of those hits were home runs, which accounted for 3 runs. The first came in the 5th when Jason Heyward went yard on a 2-0 pitch. The second the following inning on a back door slider that was pulled over the fence in right by Freddie Freeman, it was the first of two exclusive trips around the bases Tuesday night for the Braves first baseman.

Lohse’s effort which was wasted by the Brewers offense, mainly because, on any other night spreading our 5 hits, over 7 innings resulting in 3 runs, while striking out 8, and only allowing 2 walks would result in one in the win column. 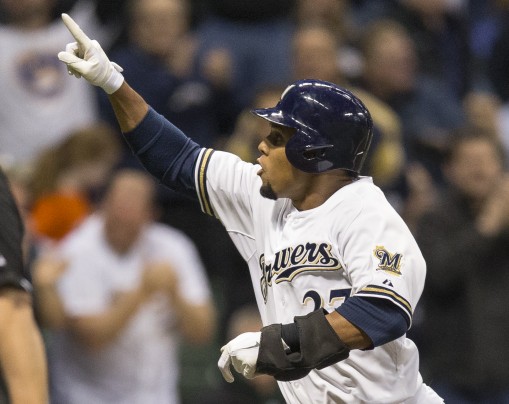 Gomez going “yard” in the 1st

The Brewer offense was pretty much non-existent, but, didn’t start out that way. In fact it started with a bang, when the Dominican Duke, Carlos Gomez (below) saw the first pitch from Alex Wood and went yard! Gomez crushed the Braves starter for a 434 foot home run to dead center field, and was practically around second by the time the ball landed. Carlos also showed some nice patience in the later innings by walking twice which resulted in a stolen base and a run scored in the 8th. Aramis Ramirez, a self proclaimed “slow starter” went 2-4 and drove in the Brewers only other run Tuesday night. So far this season Aramis has accounted for 3 of the 4 Brewers RBI in the first two games. 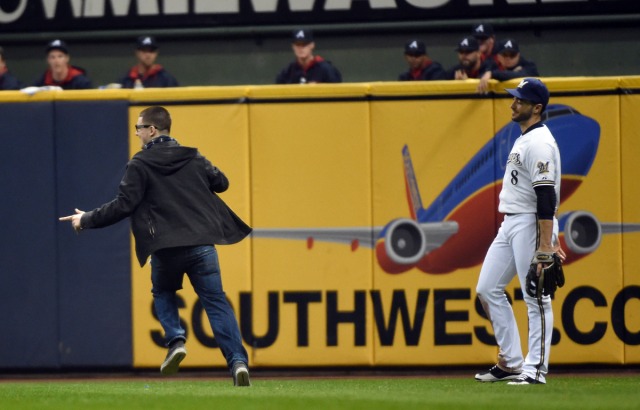 The only other excitement in the Brewers 5-2 loss was in the top of the 3rd with 2 outs a fan ran on to the field and high fived Ryan Braun in Right and Low-fived Carlos Gomez in Center. The incident shortly ended there after, but it seemed to have taken forever, since both the fan and grounds crew moved along at a slow jog, reminiscent of O.J.’s 1994 White Bronco chase down Interstate 405. Here Carlos on the situation:

The Brewers have a chance to right the ship Wednesday afternoon when Matt Garza gets his first regular season assignment for the Crew, before the team heads east to take on last seasons World Series Champion Boston Red Sox.

If you want to hear what Carlos had to say about the fan who ran on to the field go to: http://www.thebig920.com/onair/jeff-miller-sports-53489/missed-oppurtunity-12213084#ixzz2xjVNtJw6