Game 3 of the 109th World Series was the FIRST to end with an obstruction call … but was it obstuction? 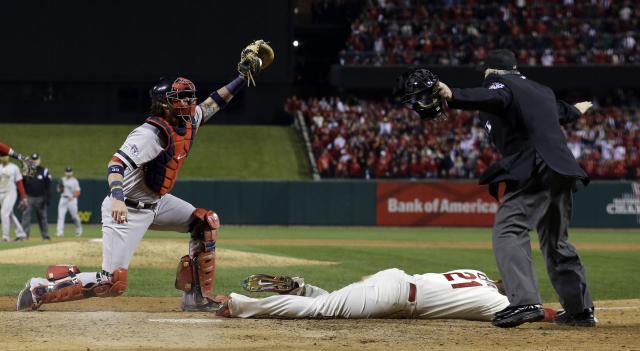 Yes, by the letter of the rule it was…BUT where was Boston third-baseman Will Middlebrooks  suppose to go? He stayed on the ground. If he gets up or, rolls out of the way he is most certain to cause a collision. St. Louis’ base runner, Allen Craig was actually out of the baseline, and stumbled BEFORE he got to Middlebrooks.

Here’s the rule from the rule book:

OBSTRUCTION is the act of a fielder who, while not in possession of the ball and not in the act of fielding the ball, impedes the progress of any runner.

Rule 2.00 (Obstruction) Comment: If a fielder is about to receive a thrown ball and if the ball is in flight directly toward and near enough to the fielder so he must occupy his position to receive the ball he may be considered “in the act of fielding a ball.” It is entirely up to the judgment of the umpire as to whether a fielder is in the act of fielding a ball. After a fielder has made an attempt to field a ball and missed, he can no longer be in the “act of fielding” the ball. For example: an infielder dives at a ground ball and the ball passes him and he continues to lie on the ground and delays the progress of the runner, he very likely has obstructed the runner. 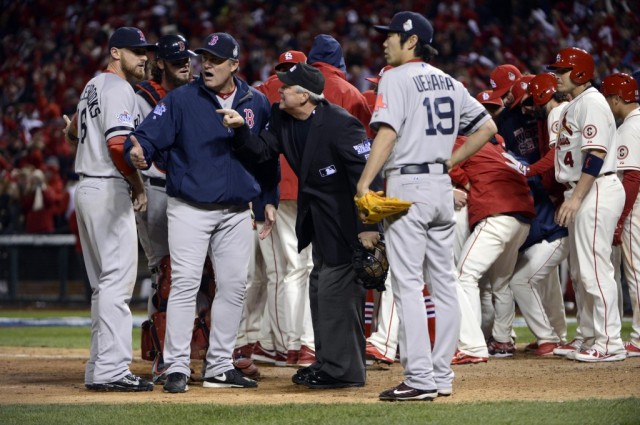 When obstruction occurs, the umpire shall call or signal “Obstruction.”

(a) If a play is being made on the obstructed runner, or if the batter-runner is obstructed before he touches first base, the ball is dead and all runners shall advance, without liability to be put out, to the bases they would have reached, in the umpire’s judgment, if there had been no obstruction. The obstructed runner shall be awarded at least one base beyond the base he had last legally touched before the obstruction. Any preceding runners, forced to advance by the award of bases as the penalty for obstruction, shall advance without liability to be put out.

Rule 7.06(a) Comment: When a play is being made on an obstructed runner, the umpire shall signal obstruction in the same manner that he calls “Time,” with both hands overhead. The ball is immediately dead when this signal is given; however, should a thrown ball be in flight before the obstruction is called by the umpire, the runners are to be awarded such bases on wild throws as they would have been awarded had not obstruction occurred. On a play where a runner was trapped between second and third and obstructed by the third baseman going into third base while the throw is in flight from the shortstop, if such throw goes into the dugout the obstructed runner is to be awarded home base. Any other runners on base in this situation would also be awarded two bases from the base they last legally touched before obstruction was called.

Since obstruction is ruled an error, the last World Series game to end in an error, was Game 6 of the1986 Fall Classic, when Boston’s Bill Buckner committed the most famous E3 in Series history, giving the Mets the win. The Mets went on to win game 7, and the their 2nd World Series.