That’s harsh, I know, but, is the NCAA just that gullible, or is it yet another case of a star athlete being coddled by the system?

After 6 hours of questioning by the NCAA, “Johnny Football” was exonerated for allegedly being paid for his autographs…wait, it wasn’t a total exoneration he was still hit with a 1/2 game suspension in the Aggie’s opening game this season (Rice University)…merely a “slap on the wrists.” 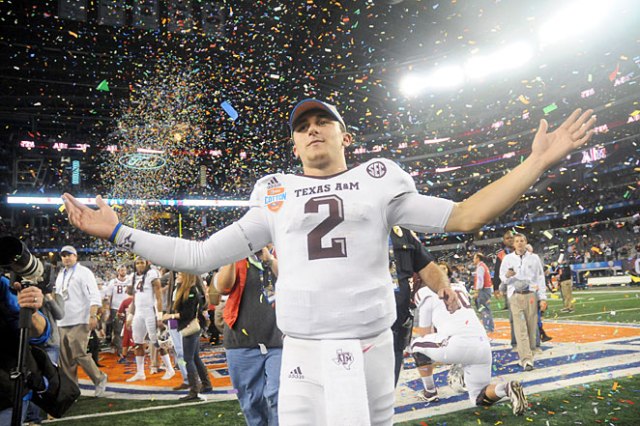 The NCAA said there is/was no proof that Manziel took any money, or that there isn’t any money waiting for him. If that’s the case and if there was NO infraction WHY even suspend him for a half of a game? I think a deal was cut…

Maybe a better “non”-punishment would have been to have the Manziel sign autographs (for free) for an hour immediately after each game this season including whatever Bowl game A & M participates in.

Anyone who thinks Manziel didn’t take cash for his autographs, or that there isn’t money waiting for him is naïve and should contact me on some ocean front property in Arizona I have for sale… I still have a deed or two left in my Easter basket that the Easter Bunny left for me last year.

Ask yourself this, WHY would he sign several hundred, maybe a thousand autographs for “nothing” when he’s the hottest collegiate player on the planet? No one is THAT nice. I’m sure he had better things to do like NOT being hung over, after NOT drinking, and NOT showing up for a prestigious football camp that invited him.

What the NCAA did on Wednesday was a joke, and they should be ashamed for insulting our intelligence as fans. As far as Manziel, well only time will tell what type of person he ends up to be, and whether he was a flash in the pan, or go on to have a great career in football.

*don’t get me wrong Manziel can do whatever he wants, he’s young, successful, in college, has money… (hell I would be “tearing” it up too), but be a man about it, and own up to your mistakes.