Hard to believe it’s been 30 years, but that’s exactly how long it’s been since the most memorable game of 1983 was played (7-24-83). A game which has it’s own name, just mention the “Pine Tar” game to anyone who was watching sports in the 80’s and they be able to tell you all about it, and how crazy it was.

In the top of the ninth on a muggy afternoon in the Bronx the Yankees were ahead 4-3 on the hated rival the Kansas City Royals. With 2 out, the Royals had a man on base when future Hall of Famer (1999) George Brett strolled to the plate to face the most feared reliver of the time, and future Hall of Famer (2008) Goose Gossage. Brett promptly drove a fast ball into the right field seats to give the visiting Royals the lead…or did he?

Before Brett crossed home plate Yankee Manger Billy Martin who was never shy of the spot light or controversy secured Brett’s bat that the bat boy forgot to pick up and showed it to first year umpire Tim McClelland stating that the pine tar on the bat was too high on the barrel. While Brett collected himself on in the dug out the umpires converged measured the tar on the bat using the 17″ width of home plate to do it… and called Brett out.

“The bat handle, for not more than 18 inches from the end, may be covered or treated with any material (including pine tar) to improve the grip. Any such material, including pine tar, which extends past the 18-inch limitation, in the umpire’s judgment, shall cause the bat to be removed from the game. No such material shall improve the reaction or distance factor of the bat.” – Rule 1.10 (b), Official Rules of Baseball, 1983 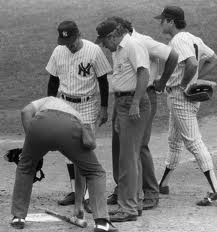 Brett exploded out of the dugout, face beet red, arms flailing and spit from tobacco coming out of his mouth, headed straight for home plate umpire Tim McClelland… it was incredible ….I still to this day have not seen a ball player that mad, and after what seemed like an eternity the game was over. Brett was called out, and the Yankees were victorious. 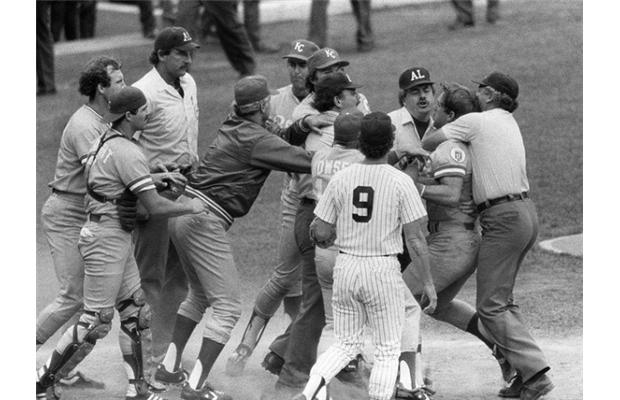 The Royals protested the game, and after the American League president overruled the call the game was resumed on Aug. 18 right where it left off.  Kansas City held on for a 5-4 win when the Yankees failed to score in the bottom half of the ninth and won the most memorable game of 1983.