It would be blasphemous for any sports page or blog to not mention one of the GREATEST FOOTBALL COACHES of ALL TIME on what would be his 100th birthday. 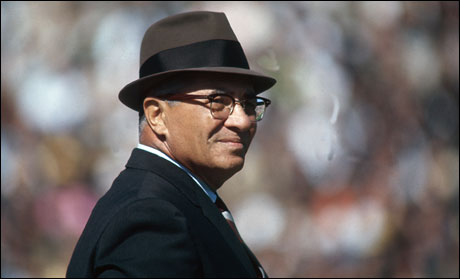 Vincent Thomas Lombardi would be 100 today, June 11th 2013. Lombardi who has the Superbowl Trophy named after him, not only won the first two Superbowls, he also turned around a floundering football team, the Green Bay Packers. He turned the Green and Gold into a powerhouse, winning 6 titles in 9 years. His revolutionary “Green Bay Power Sweep” that was originally developed when he was an Assistant with the Giants, transformed the Packers into winners, and Green Bay, Wisconsin into “Titletown U.S.A.”

Lombardi played football at St. Francis Preparatory School and Fordham University. His coaching  career started as an assistant and later as a head coach at St. Cecilia High School. He was an assistant coach at both Fordham, at West Point, as well as with the New York Giants in the NFL before becoming a head coach and sealing his legacy with the Green Bay Packers from 1959 to 1967. He retired from coaching after that second Super Bowl, only to come back and coach the Washington Redskins for one season (1969). It needs to be noted that he always got the very best out of what he had to work with, he never had a losing season as a head coach in the NFL. He compiled an overall record of 149 wins, 47 losses, and 6 ties in the NFL. In the regular season he was 96-34-6, preseason 44-12 and an amazing 9-1 in the post season.

“Winning is not a sometime thing, it is an all the time thing. You don’t do things right once in a while…you do them right all the time.” – Vince Lombardi