We’ve found someone to sit next to Manti Teo on the bus to Liarsville or Stupid Town, whichever they prefer. (Manti Teo was the Notre Dame Linebacker who said he was duped into thinking he had a girlfriend, one that never existed).

The newest member to “Club Teo” is Miami Marlins pitcher Alex Sanabia, who was caught hocking a lugee on a ball right after giving up a home run in the Phillies game earlier in the week.

In an AP article, Sanabia who said he was not aware that there was a rule agaist spitting on the ball, had this to say about the incident: “I don’t know what they expect from spitting on it? My intention wasn’t to be like `Let’s get more movement. My intention was I need more grip…because it was super slick.”

Alex, just incase you don’t get a chance to read a rule book, an emery board on the mound is also illegal. Wait…since you’re in the National League and are able to bat, corked bats are illegal. There’s another biggie you may not be aware of…betting on baseball… it is also illegal. So illegal that it can get you kicked out of baseball FOREVER! 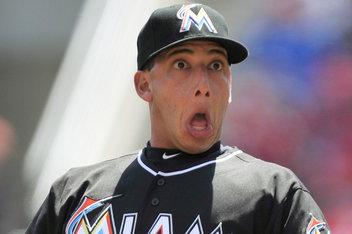 4 thoughts on “The Liar’s Club”