Steve Austin was worth a mere $6 million ($31 million adjusted for today) he had a bionic left eye 20:1 zoom, left arm, and bionic legs that allowed him to reach speeds up to 60 mph. Of course “The $6 Million Dollar Man” was a fictious role that Lee Majors played from 1973-78 on television…we have our own version of a multi-million dollar “super-human” here in Wisconsin…and he doesn’t work for a secret government agency like Majors character did, just get the ball in the END ZONE on any given Sunday…which in some cases could be tougher.

Aaron Rodgers on Friday became the highest paid football player in the history of the NFL, when he signed a 5 year extension  worth $110 million dollars. Rodgers will receive $40 million next year, and will be in Green Bay through 2019. 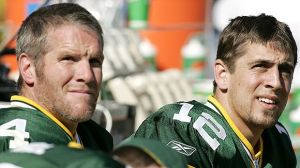 Just eight years ago Rodgers sweated out the NFL Draft and was finally picked 24th by the Packers. He then spent 3 years behind Brett Favre, before getting the reins himself  in 2008, two years later the Lombardi Trophy was back in Titletown (he was also named the games MVP).  A year later he led the Packers to a 15-1 record was named the league’s MVP. Not bad.

Is Rodgers worth it? Sure. I know this contradicts my stance in the past (Pujol$), and I’m not going to rant and rave about the money, because there is no need to.  Aaron put in his time, and is a genuinely nice human being. He didn’t “play” the Packers for more money,or threaten to leave or retire, they just came out and gave it to him (he still had two years left on his contract), you can’t fault a guy for that. There is no one on this planet or reading this blog that if given a huge sum of money to continue to do what they do for a living would turn it down.

Rodgers tweeted after his signing “Thanks to the Organization, coaching staff, teammates, Packer nation for last 8 years! Excited about 7 more!”