Almost… Monday night, the Rangers Yu Darvish joined an elite group of major leaguers, the ones who came within a batter or two of perfection. The 26 year old Darvis was untouchable for 8 and 2/3rd innings as he mowed down the hapless Astros retiring 14 of them by the way of the “whiff” (a career high). 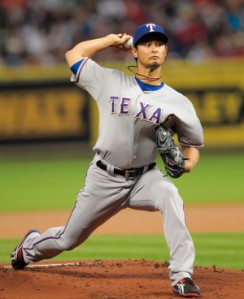 Then came the 27th Houston batter of the night,  infielder Marwin Gonzalez. Gonzalez came to the plate and promptly laced Darvis’  first pitch, number 111 on the night,  right back  through his legs into centerfield. Relief came in finished off the game, and the Rangers won 7-0. 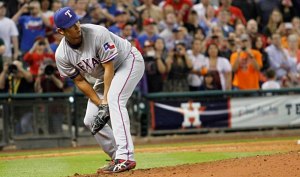 The most heartbreaking attempt at perfection came in 2010, not because of the fact that the last batter got a hit, but because he didn’t. On June 2nd, Armando Galarraga needed just one more out to seal the deal, when  blown call at first base by umpire Jim Joyce nixed it, and made a history of its own. On a play where Galarraga went to cover first on a ball hit in the infield, everything was routine. Galarraga  got to the base in plenty of time, as did the ball, but Joyce called the runner safe. Afterward Joyce apologized to Galarraga, admitting  his mistake, but the damage was done, and perfection lost.

As for the longest Non-Perfect Game, well that dubious honor goes to Harvey Haddix of the Pittsburgh Pirates, and happened right here in Milwaukee WI, at Milwaukee County Stadium. Haddix had complete control of the Braves that muggy May evening in 1959 (26th). Haddix was battling a cold but still managed to retire the first 36 batters in a row! Then came unlucky inning number 13, and that’s exactly what it was for the guy nicknamed “Hard Luck,” UNLUCKY!

The bottom of the 13th is when Braves finally got to Haddix.  First, with a throwing error, then a sacrifice bunt, followed by an intentional  walk, and finally a  game-winning double by Joe Addcock. That was it…perfection, no-hits, shut-out, and the win…all gone. The Braves won probably the best game ever pitched by a winning or losing pitcher 1-0.

(Joe Adcock actually hit a homerun, but Adcock  passed Hank Aaron on the base path because Aaron seeing Mantilla cross home plate cut across the pitcher’s mound for the dugout, he didn’t know that Adcock hit the ball for a homerun. Therefore the homerun was ruled a double)

Darvis is only 26 years old, and has a bright future in front of him, I’m sure he’ll get another shot at perfection, and be added to “that”  list as well.