It’s only fitting that on the 75th Anniversary of one of the greatest vaudeville skits of all-time “Who’s On First” by Abbot and Costello, that my streak of consecutive Opening Days for the team I love – The Milwaukee Brewers comes to an end.

All great streaks come to an end, here’s just a few of baseballs:

Harry Davis (1897) and Cheif Wilson (1912) both with the Pittsburg Pirates hit a triple in 5 consecutive games.

Johnny Vandermeer pitched no-hitters in consecutive starts (6/11  and 6/15) for the Cincinnati Reds 1938.

Paul Molitor hit in 39 consecutive games (5th All-Time) for the Brewers in 1987. 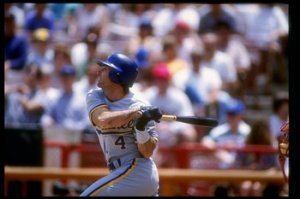 The Brewers won 13 games in a row in 1987 to start the season, and everyone feasted on free George Webb hamburgers.

Ironically, that season was also the beginning of my Opening Day streak… as the saying goes all good things come to an end, but with every end there is a new beginning…there’s always next year!

2 thoughts on “The Streak”