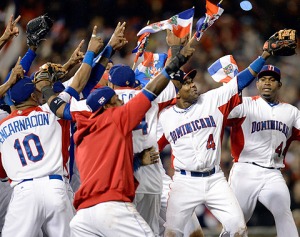 The baseball world has a new king, and it hails from the Dominican Republic! The third World Baseball Classic is in the books after a rainy Tuesday night in San Fransisco, that’s when the Dominican team blanked Puerto Rico 3-0. Puerto Rican squad stranded 11 runners in scoring position. It was the Dominicans second win over the Puerto Rican team in this years Classic.

The Dominican team not only won the WBC, but they did it in an amazing fashion. In the three-year history of the every 4 year round-robin event, they are the first team to go without a loss, winning all 8 of their games. The Dominicans outscored their opponents 36-14. 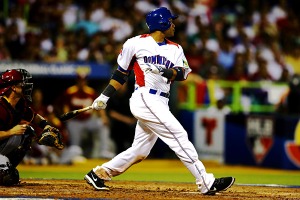 Robinson Cano (Yankees) second baseman for the Dominicans was the MVP leading all hitters, batting .469 while collecting 15 hits, and amassing 25 total bases in the 8 games. As far as the bullpen is concerned they were stellar as well. They gave up zero earned runs in 20 2/3 innings over the last 5 games. While their “closer” Fernando Rodney (Tampa Bay Rays) and his lucky plantain allowed only 1 hit  and zero earned runs in his 7 1/3 innings over the Classic. 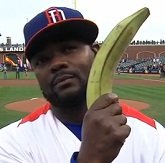 Fernando Rodney and his lucky plantain

The U.S. needs to step it up, for the simple fact that we invented the game, but unfortunately our players play more for money, than for pride in their country.

One thought on “Dominican Domination”