Maybe, Wisconsin Senior Ryan Evans changed his major and didn’t tell anyone. He might be studying how to become a mason, because this whole season he’s been throwing up “bricks” at the line. 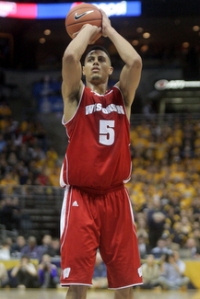 Ryan this year has been 24 of 59, a whopping 40.6%! In last night’s 58-53 overtime loss to the Golden Gophers he was 2 of 8, leaving 6 points on the floor which could’ve been the difference in the game. For Evans, it has to be mental. His Freshma year he shot 74% from the charity stripe, and 72 % in his Sophomore year, it’s time to get back to basics.

If the Badgers or any team for that matter are going to go anywhere, they need to make their free-throws, plain and simple.  What Coach Bo Ryan needs to do is switch up Ryan’s practice time, and concentrate on his free-throws until he can make 25 of 25, five of those blindfolded. If he misses, he starts over.  Maybe take a lesson from Chevy Chase in Caddyshack, and “be the ball.”

If Evans continues down this path, he will not only NOT be going to the NBA, he won’t be playing in Europe, and probably have a real hard time making a church league.