The Circle is Complete

Move over “Big Daddy, Prince is coming to Motown.  Prince Fielder the Milwaukee Brewers 3 time All-Star and free agent has agreed to a 9 year contract worth an estimated $214M with the Detroit Tigers. The same team that his dad played for from 1990-1996. 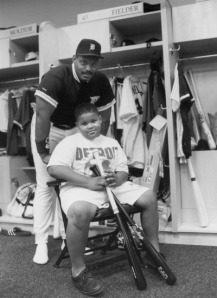 Prince leaves a city who loved him, and that he said, he and his family loved as well. He now lands in a city where Cecil, his dad was a cult icon and an All-Star. (“Big Daddy” was one of only 4 players to ever homer over the left-field roof at old Tiger Stadium). Since it’s no secret that Prince and his dad don’t have the best relationship. So, depending on how the press handles that, playing in Detroit may be difficult, and wear on the new first baseman.

Prince, and the Tigers want to win now, so this was a win-win transaction, well at least on paper it is. The Tigers have been in the post season twice in 6 years, and with the exception of 2008 has been knocking on the playoff  doors.  When owner Michael Ilitch found out that Victor Martinez  his protection for Miguel Cabrera might miss the whole 2012 season,  he when “shopping,” and Fielder was still on the shelf.  So if the price of Little Caesars Pizza goes up you’ll know why (Ilitch is also the owner of Little Caesars Pizza).

A couple of pros and cons to go along with this deal that awards Prince the fourth largest contract in the history of baseball.  Fielder will no longer has the luxury of 81 games in ideal conditions like he had at Miller Park for the last 7 years. Comerica is a beautiful ballpark, but, it’s not protected from the elements, which we all know how brutal early spring and late fall can be in the mid-west.

Prince does benefit when it comes to Spring Training.  He lives in Orlando, FL and the Tigers train in Lakeland, FL  (about an hour drive), so in that respect he can go home at night, to stay close to his family. Which we all know is important to him.

Good Luck Prince, and Detroit get ready for plenty of this: 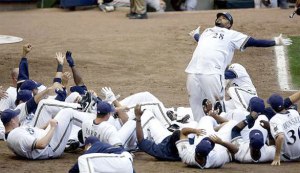 2 thoughts on “The Circle is Complete”