Ron Santo Has a New Address

Unfortunately he passed away December 3, 2010 (to diabetes, which he had lived with since the age of 18). The announcement by the Veterans Committee came almost a year to the date of  his passing.   He joins 45 other Cubs in the Hall, the last one being 2010 BBWAA Inductee “The Hawk” Andre Dawson (eventhough Dawson  spent 1987-92 with the Cubs and was the league MVP in ’87, his plaque has him wearing a Montreal Expo cap).

Santo’s election into the Hall was long past due. The power hitting 3rd baseman, who was a nine time All-Star in just 15 seasons should’ve been elected into the Hall if not in his first year of eligibility 1980, then VERY shortly there after. Looking at his career statistics and accomplishments it’s clear that his name had been by-passed for far too long.

>He led the N.L. in assists for seven-straight seasons from 1962-68, tying a National League record.

He ranks in the Cubs’ top-10 all-time rankings in multiple categories:

After more research I found that there have been 17,733 ballplayers  in the storied history of Major League Baseball, and Ron will ONLY be the 12th third baseman in the HOF (Hall of Fame).  Take a moment to digest those numbers and that ratio (1 out of every 1,477.75 major leaguers). Ron’s first year of eligibility was in 1980 when he received only 3.9% of the votes, his percentages had gone up since then topping out at 43.1% in 1998 (last year of eligibility), falling  far short of the required 75%. Why, did it take 32 years and 19 ballots to get it right, and allow one of the most worthy recipient  in the hallowed halls in Cooperstown?

The Cubs did their part earlier this year. On Aug 10th (2011) before a game vs. the Washington Nationals (which the Cubs ended up winning 4-2),  they unveiled, and dedicated a bronze statue outside of Wrigley Field. 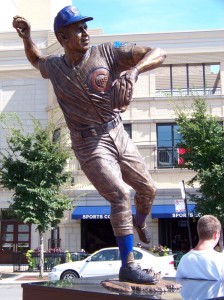 Ronnie will have to look down on HOF ceremony on July 22, 2012  from that big ballpark in the sky instead of presenting probably one of the most heart-felt acceptance speeches of all time, you just know it would’ve been. At the end of the day when it’s all said and done, Santo’s “in”, and his family, their family, and hundreds of thousands of baseball fans will now be able to honor his greatness.

Ron was always quoted as saying “I’m a Cubbie. I’ll always be a Cubbie.” Well, Mr. Santo you may have been #10 in the program, but always #1 in our hearts.

One thought on “Ron Santo Has a New Address”