Eating for the cycle

Spring training has begun, that means the 2011 baseball season is right around the corner. You can almost smell those sausages on the grill in the parking lot.  As for the menu at Miller Park  it has been set, and it has a new twist.  This year you can actually “eat for the cycle.”

In the 41 year history of the Milwaukee Brewers, only 6 Brewers have “hit for the cycle” (getting a single, double, triple, and home run in a single game), Mike Hegan, Charlie Moore, Robin Yount, Paul Molitor, Chad Moeller, and Jody Gerut.

The fan version of this would be eating  one of each signature sausages featured at Miller Park (hot dog, brat, italian, polish, and chorizo) during a game.  While being delicious, it could also be gut busting.  Enter the new 2011 Sausage kabob. 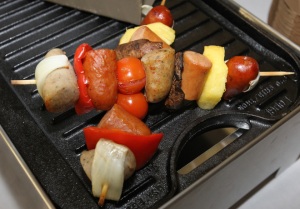 The sausage kabob was the brainchild of 25-year-old Courney Ring of Sauk City, WI.  She entered a contest run by the Milwaukee Brewers to come up with a new concession item for the upcoming season. She obviously won with this no-brainer of an idea for Milwaukeen’s who clearly love their sausage heritage. The sausage kabob will  be a skewer impaled with a piece of each of the sausages sold at Miller Park, along vegetables and pineapple.

The sausage kabob is sure to be a be a home run!

One thought on “Eating for the cycle”